The pandemic Novel Coronavirus (COVID-19) is causing unprecedented damage. Here you can get more information about the Fund

We proudly built the GERD with our own money,with the contribution of all Ethiopians
click the link below to contribute more

You are here: Home / Overview About Ethiopia

The Federal Democratic Republic of Ethiopia is located in the north-eastern part of Africa commonly known as the Horn of Africa. It is strategically proximate to the Middle East and Europe, together with its easy access to the major ports of the region, enhances its international trade. It is bordered by the Sudan in the west, Somalia and Djibouti in the east, Eritrea in the north and Kenya in the south. The country covers 1,112,000 square kilometres (472,000 sq. miles) making it roughly as large as France and Spain combined and is five times the size of the UK.

From the north and running down the center are the Abyssinian highlands. To the west of the chain the land drops to the grasslands of Sudan, to the east to the deserts of the Afar. South of Addis Ababa, the land is dominated by the Rift Valley Lakes.

With a population of about 110.14 million, Ethiopia represents a melting pot of ancient cultures with Middle Eastern and African cultures evident in the religious, ethnic and language composition of its Semitic, Cushitic, Omotic and Nilotic peoples. The Ethiopian peoples comprise about eighty nationalities of which the Amhara and the Oromo constitute the majority, with about 60 percent of the total population. Approximately 85 percent of the population live in the rural areas. The annual population growth rate is about 3.09 percent, and the economically active segment, between ages 14 and 60, is about 50 percent of the total population. Ethiopia is a Federal Democratic Republic composed of 9 National Regional States (NRS) – Tigray, Afar, Amhara, Oromia, Somali, Benishangul-Gumuz, Southern Nations, Nationalities and Peoples Region (SNNPR), Gambella and Harari – and two administrative councils – Addis Ababa and Dire Dawa. The NRS and the Administrative councils are further divided into 62 zones and 523 woredas. 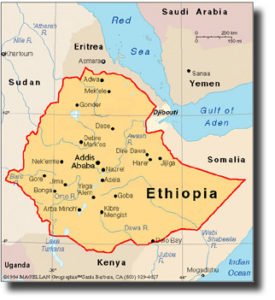 Location: Ethiopia is strategically located in the Horn of Africa, 3′ and 14.8″ latitude 33′ and 48′ longitude bordering Somalia, the Sudan, Djibouti, Kenya and Eritrea with a total border length of 5,311 km.

Its proximity to the Middle East and Europe, together with its easy access to the major ports of the region, enhances its international trade.

The most famous Ethiopian river is the Blue Nile or Abbay, which flows a distance of 1,450 kilometers from its source to join the White Nile at Khartoum. From the north and running down the centre are the Abyssinian highlands. To the west of the chain the land drops to the grasslands of Sudan, to the east to the deserts of the Afar. South of Addis Ababa, the land is dominated by the Rift Valley Lakes.

Ethiopia is a land of enormous diversity and as a result Ethiopia has more than 80 languages and over 200 dialects. Amharic or Amharigna is the official language of Ethiopia although the government encourages local languages to be taught in schools. The working languages of the national/regional governments may differ according to regions. Other main languages include Oromigna and Tigrigna are also widely spoken.

Ethiopia is the oldest independent country in Africa and one of the oldest in the world. What are believed to be the oldest remains of a human ancestor ever found, which have been dated as being some five million years old, were discovered in the Awash Valley in Ethiopia. This beats the discovery of “Lucy”, a 3.2 million year old skeleton, who was unearthed in the same area in 1974.

The Greek historian Herodotus, of the fifth century BC, describes ancient Ethiopia in his writings, while the Bible’s Old Testament records the Queen of Sheba’s visit to Jerusalem where “she proved Solomon with hard questions”. Matters clearly went further than that because legend asserts that King Menelik – the founder of the Ethiopian Empire – was the son of the Queen and Solomon.

Remains of the Queen of Sheba’s palace can still be seen today in Axum, in the province of Tigray, northern Ethiopia. Axum is also home to many other extensive historical sites, including the home of the Ark of the Covenant, brought there from Jerusalem by Menelik.

Missionaries from Egypt and Syria reached Ethiopia in the fourth century and introduced Christianity. In the seventh century, the rise of Islam meant Ethiopia was then isolated from European Christianity. The Portuguese re-established contact with Ethiopia in the 1500s primarily to strengthen their control over the Indian Ocean and to convert Ethiopia to Roman Catholicism. A century of religious conflict followed resulting in the expulsion of all foreign missionaries in the 1630s.

This period of bitter conflict contributed to Ethiopian hostility towards foreign Christians and Europeans which persisted until the twentieth century and was a factor in Ethiopia’s isolation until the middle of the nineteenth century.

From the 1700s, for roughly 100 years, there was no central power in Ethiopia. This “Era of the Princes” was characterized by the turmoil caused by local rulers competing against each other. In 1869, however, Emperor Tewodros brought many of the princes together, and was a significant unifying force. He was succeeded by Emperor Yohannes, who built upon the efforts made by Tewodros, as well as beating off invasion attempts by the Dervish and the Sudanese.

Emperor Menelik II reigned from 1889 to 1913, fending off the encroachment of European powers. Italy posed the greatest threat, having begun to colonize part of what would become its future colony of Eritrea in the mid-1880s. In 1896 Ethiopia defeated Italy at the Battle of Adwa, which remains famous today as the first victory of an African nation over a colonial power.

In 1916, the Christian nobility deposed the sitting king, Lij Iyassu because of his Muslim sympathies and made his predecessor’s, (King Menelik 11 1889 – 1913), daughter, Zewditu, Empress. Her cousin, Ras Tafari Makonnen (1892-1975) was appointed regent and successor to the throne.

Zewditu died in 1930, after which the regent – adopting the name Haileselassie – became Emperor. His reign was interrupted in 1936 when Italian forces briefly invaded and occupied Ethiopia. Haileselassie then appealed to the League of Nations, but that appeal fell on deaf ears and he fled to exile in the UK, where he spent five years until the Ethiopian patriotic resistance forces with the help of the British defeated the Italians and he returned to his throne.

Haileselassie then reigned until 1974 when he was deposed and a provisional council of soldiers (the Derg, meaning committee) seized power and installed a government which was socialist in name and military in style. Fifty nine members of the Royal Family and ministers and generals from the Imperial Government were summarily executed. Haile Selassie himself was strangled in the basement of his palace in August 1975.

Major Mengistu Haile Mariam assumed power as head of state and Derg chairman after having his two predecessors killed. His years in office were marked by a totalitarian style government and the country’s massive militarization financed and supplied by the Soviet Union and assisted by Cuba.

The brutality of the regime over a period of 17 years – aided by droughts and famine – hastened the Derg’s collapse.

Insurrections occurred throughout Ethiopia, particularly in the northern regions of Tigray and Eritrea. In 1989, the Tigrayan People’s Liberation front (TPLF) merged with the Amhara and Oromo liberation fronts (EPDM & OPDO) to form the Ethiopian Peoples’ Revolutionary Democratic Front (EPRDF). In May 1991, the EPRDF forces advanced on Addis Ababa forcing Mengistu to flee to Zimbabwe.

In 1991, the Transitional Government of Ethiopia (TGE) was set up from the EPRDF and other political parties in the country with an 87 strong Council of Representatives and a transitional constitution.

Meanwhile, in May 1991, The Eritrean People’s Liberation front (EPLF), led by Isaias Afworki assumed control of Eritrea after 30 years of struggle and established a provisional government. This ran Eritrea until April 1993 when Eritreans voted for independence in a UN monitored referendum.

In Ethiopia, President Meles Zenawi and members of the TGE pledged to oversee the formation of a multi-party democracy. The election for a 548 member constituent assembly was held in June 1994. This assembly adopted the constitution of the Federal Democratic Republic of Ethiopia in December 1994. Elections for the first parliament were held in 1995 and the government was installed in August of that year. 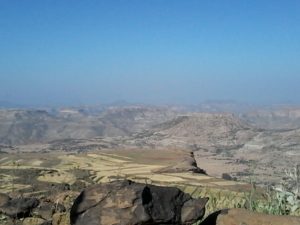 With an area of 114 million square kilometres, Ethiopia is as large as France and Spain combined and is five times the size of the UK. From the north and running down the centre are the Abyssinian highlands. To the west of the chain the land drops to the grasslands of Sudan, to the east to the deserts of the Afar. South of Addis Ababa, the land is dominated by the Rift Valley Lakes.

Ethiopia is strategically located in the Horn of Africa. Its proximity to the Middle East and Europe, together with its easy access to the major ports of the region, enhances its international trade. It is bordered by the Sudan in the west, Somalia and Djibouti in the east, Eritrea in the north and Kenya in the south. 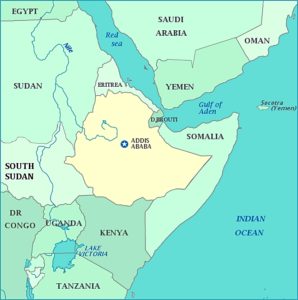 Urban Ethiopians often use both systems as appropriate. Nevertheless, in general, when asking about dates and times, it is always worth checking which system is being used!

There are two seasons in Ethiopia: in most of the country the dry season prevails from October until May with short rains in March; the wet season runs from June until the end of September. In the Omo and Mago parks however, in Southern Ethiopia, the seasons are different with the main rains from March to June, and shorter rains in November.

Although Ethiopia lies within 15 degrees north of the equator, owing to the moderating influence of high altitude, the central highlands, where most Ethiopian people live, generally enjoy a temperate and pleasant climate. In the highlands above 2,000 meters the temperature rarely exceeds 25°C in most of the country. In the lower lying areas (Awash, Omo and Mago parks), which experience sub-tropical and tropical climates, it can get considerably hotter. The temperature generally drops quite rapidly towards sunset.