Blog - Latest News
You are here: Home / News / Ethiopia to Become Victorious in Nation Building as Its Foundation Strongly... 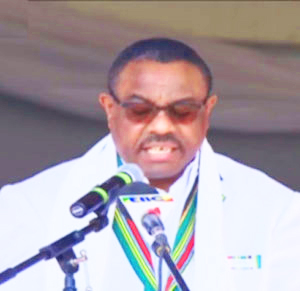 Semera December 08/2017 Prime Minister Hailemariam Desalegn said that Ethiopians will overcome the challenges and become victorious in nation building as the foundation of the “New Ethiopia” is strongly built.

The Premier made the remark while addressing the gathering in the town of Semera, Afar regional state to celebrate the annual nations, nationalities and peoples day.

Hailemariam said the day, observed to commemorate the 23rd anniversary of the adoption of the constitution, which is the foundation for freedom and equality of people and democratic rights.

The day has also signifies the strengthening of the unity of Ethiopians, the Premier said.

He said the day also signifies the decision of nations and nationalities of Ethiopia to rectify wrong practices of the past and build a single political community.

Celebrating the day sets a platform to discuss on issues related to nation building and future of the country, Hailemariam added.

He also noted that there are some forces that are trying to destroy the achievements of the country and always ready to hold back development.

“We will overcome our challenges and defeat those forces as we always do since Ethiopia’s unity is not fragile as those forces thought” the premier emphasized.

The fight against corruption and maladministration will be consolidated as wiping out these practices is crucial for the sustainability of the development.

He also urged the public, the primary beneficiary of the development, to actively participate as ever in the process of rooting out corruption and maladministration.