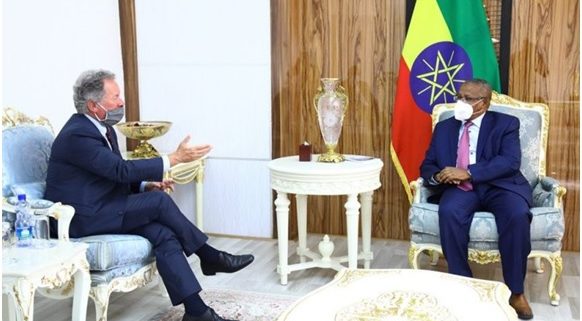 The two discussed on how to cooperate to halt the spread of the coronavirus as well as prevent desert locust and floods catastrophes in the region.

They further exchanged views on the construction of the Grand Ethiopian Renaissance Dam (GERD), according to the Ministry of Foreign Affairs.

Commending WFP’s help to the east African nation, Gedu said Ethiopia will strengthen its cooperation with the organization.

He further briefed him about on-going measures by the government to control COVID-19 pandemic from spreading and damages caused by locust and flash floods in Ethiopia and neighbouring countries.

The Horn of Africa region needs help from the international community now more than ever, he said, further requesting WFP to strengthen its on-going support.

The Ethiopian Foreign Minister also briefed Beasley on the progress of the GERD project and the negotiations held so far between Ethiopia, Sudan and Egypt.

Gedu said also underscored the importance of support from the international community for the three countries to resolve their differences through dialogue.

The Executive Director for his part said WFP will strengthen its cooperation with Ethiopia. He further appreciated Ethiopia’s efforts to curb the spread of the pandemic as well as reduce impact of locust and floods.

Beasley also called on the three countries to resolve their difference regarding the dam through discussions.