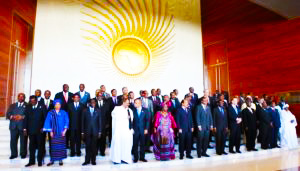 The 32nd Ordinary Session of the African Union Wrapped-up today, (February 10)
The Assembly, which comprises Heads of States and Government of all the 55 African countries, has ended its 32nd ordinary session. The Assembly meeting is the culmination of the Union’s statutory meetings and was preceded by the meetings of the Executive Council and the Permanent Representatives Committee.
Among the responsibilities of the Assembly were to determine the AU’s policies, establish its priorities, adopt its annual programme and monitor the implementation of its policies and decisions.
In this regard, the Heads of State and Government took over their two day meeting, receiving several reports including report on the Outcome of the Leadership In Health Financing Funds High Level Meeting presented by President Paul Kagame of Rwanda; President Mamadou Issoufou of Niger reported on the status of the African Continental Free Trade Area (AfCFTA), as well as President Alassane Dramane Ouattara of Cote D’ivoire reported on progress achieved with regard to Agenda 2063.
The Chairperson of the African Union Commission Mr. Moussa Faki Mahamat presented reports on the Implementation of the Institutional Reform of the AU and the Annual Report on the activities of the Union and its organs.
While making his opening remarks, President Kagame welcomed to the Assembly, the new leaders of the Democratic Republic of Congo i.e. H.E. Felix Tshisekedi, and of Madagascar, H.E. Andry Rajoelina. President Kagame commended GuineaBissau, Botswana, and Zambia for signing the instrument for the African Continental Free Trade Area (AfCFTA) during this Summit, and encouraged those signatories who have not yet ratified to do so, at the earliest opportunity.
Regarding the efforts made towards sustainable financing of the Union, President Kagame remarked that, the relaunched Peace Fund now stands at $89 million dollars, with 50 Member States contributing. “This demonstrates the force of our collective resolve and ability”, he commented.
The 32nd Ordinary Session marked the end of Rwanda’s chairpersonship of the Union and President Kagame handed over to President Abdul Fattah Al-Sisi of Egypt during the opening ceremony.
President Abdul Fattah Al-Sisi called for creation of more job opportunities, and encouraged investments. The Chairperson of the African Union emphasized the need to resolve the ongoing challenges in Africa, particularly terrorism and extremism.
The sprawling city of Addis Ababa hosts the seat of the African Union (AU).

Ethiopia’s FM Meets with Senior Director for Africa at US National Security...