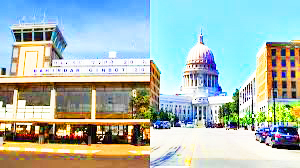 Bahr Dar City, the Capital of Amhara Regional State (Ethiopia) and the City of Madison, the
Capital City of the State of Wisconsin (USA) have become Sister Cities on November 20, 2018,
making Madison the second American city to become Bahir Dar’s sister city, next to the City of
Cleveland, Ohio. In total, Bahir Dar has now three sister cities, including Ashdod, Israel’s sixthlargest city.
The process of becoming sister cities for Bahir Dar and Madison started when a group of
Madison (Wisconsin, USA) residents submitted an application in August 2018 that would make
Bahir Dar, a sister city of the Wisconsin’s capital.
As both Bahir Dar and Madison serve as capitals for their respective state or region, the two
cities have large public universities and are located near major lakes, according to the
application.
While Bahir Dar City is known for its Lake Tana (3,200 km2), which was nominated as
UNESCO Biosphere Reserve in 2015 recognizing its national and international natural and
cultural importance, the City of Madison has more than 15,000 registered lakes including manmade lakes (of which 40% have official names). Lake Winnebago is the largest lake (557 km2)
and Petenwell Lake (93 km2) is the largest man-made lake for America’s north-central city,
Madison.

Xylem Signs Memorandum of Understanding with the Government of Ethiopia to Explore...