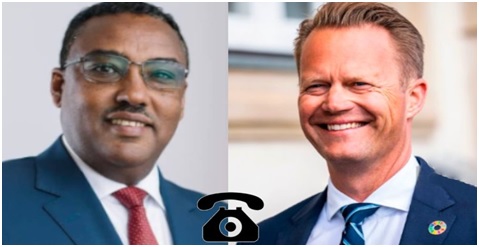 Deputy Prime Minister and Foreign Minister has conferred with Foreign Affairs Minister of Denmark, Jeppe Kofod via telephone on latest development is Ethiopia.

During the telephone conversation, Deputy Prime Minister Demeke told the Danish Foreign Minister that the government of Ethiopia has delivered humanitarian assistance to 4.5 Million people in need in Tigray region, adding that the second round support has so far commenced in the area.

Saying that 70pct of the humanitarian demand in Tigray has been covered by the government, Demeke called up on the international community increase response to the emergency support need in the region.

Except a few areas, almost many of the places that encountered humanitarian need have been accessed through the aid drive, the Deputy Prime Minister said, adding that the government has granted unfettered access to international organizations to the region.

Ethiopian Human Rights Commission and the UN Human Rights have finalized preparations to start joint examinations into alleged atrocities in the region, he noted.

The Attorney General and Federal Police Commission have been undertaking investigations on alleged human rights abuses in Tigray, the Deputy Premier added. Deputy Prime Minister Demeke also assured the Danish Minister that discussions have been held on withdrawal of Eritrean troops from the region.

Ethiopia proceeds with better preparations to make the upcoming elections democratic, free and fair, and international stakeholders including European Union have been invited to observe the polling, he explained.

Regarding the Ethiopia-Sudan border dispute, Demeke underlined that Ethiopia is ready to resolve the dispute through peaceful dialogue calling the international community to urge Sudan to withdraw its troops out of Ethiopian territory.

The Danish Foreign Minister Jeppe Kofod, to his part reiterated commitment of his government to support the humanitarian activity in Tigray and contribute to successfulness of upcoming national elections.