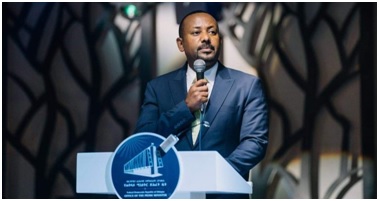 Prime Minister Abiy Ahmed has appreciated all Ethiopians at home and abroad for their contribution to make ‘Dine For Ethiopia’ initiative a success.

The Prime Minister made the remark during a ‘Dine For Ethiopia’ dinner program he hosted yesterday.

‘Dine for Ethiopia’ is an initiative launched by the Prime Minister last August to mobilize funds for the Koysha, Wonchi and Gorgora projects.

The plan was to raise 3 billion birr but the initiative surpassed its target.

According to the Prime Minister, Ethiopians in the country and abroad raised 4.2 billion birr for the three projects.

In a tweet, the Prime Minister thanked all those who contributed for the project.

“To all Ethiopians in the country and abroad that have enabled a successful DineForEthiopia through their contribution, I thank you deeply,” he said.

“In unity we shall reach our aspired destination,” he added.

The three projects that would be executed in Oromia, Amhara and Southern Nations, Nationalities and Peoples (SNNP) regional states.

The three projects are expected to create jobs for the local communities, drive tourism and create service economies.