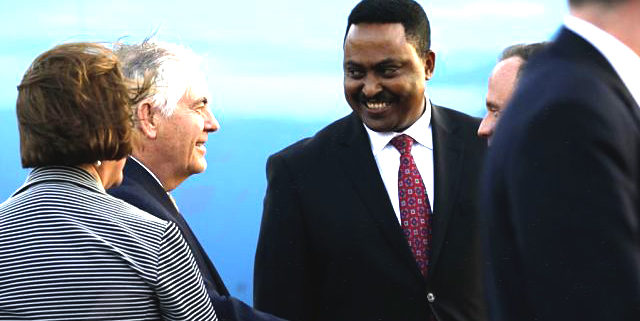 Ethiopia’s Minister of Foreign Affairs, Dr Workneh Gebeyehu received his Spanish counterpart Mr. Josep Borrell and discussed ways to bolster the ties between the two countries.
During the talks, Dr Workneh briefed Borrell about Ethiopia’s ongoing economic and political reforms as well as the role it has been playing to promote peace and economic integration in the horn of Africa region.
He noted the peaceful transition of power in Ethiopia, opening up of the political space, release of prisoners, the return to Ethiopia of armed groups, as well as the economic and social developments in the country.
Dr. Workneh also briefed Borrell on the overall situation of the Horn of Africa, ranging from the breakthrough in Ethiopia-Eritrea relations to the peace efforts in Somalia and South Sudan under the auspices of IGAD.
He also touched upon Prime Minister Dr. Abiy Ahmed’s current initiatives to bring together leaders of the region for peace and regional integration.
He said Ethiopia wants to cooperate with Spain in the areas of trade, investment, and tourism.
Dr Workneh also appreciated the support of Spain through EU for refugees and antipiracy and terrorism combat in Africa.
The Spanish Foreign Minister, Mr. Josep Borrell, said his visit is part of the efforts and desire of Spain to strengthen its ties with Africa.
He also highlighted the need to concluded investment cooperation and avoidance of double taxation agreements between the two countries.