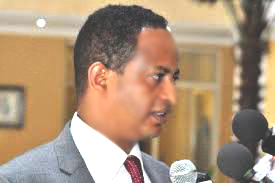 Ethiopia is keen on replicating its strong diplomatic and people-to-people ties with the US in the trade and investment frontiers, Ethiopian Ambassador to the US, Fitsum Arega said.
In an exclusive interview with The Ethiopian Herald, the ambassador stated that it is the interest of Ethiopia to expand the age-long diplomatic ties as it is a major component in the relationship with the US. Extensive works are underway to forge economic partnership.
He noted that Ethiopia’s diplomatic missions in the US are striving to attract American companies and plan was set to hold discussions with potential stakeholders to scale up the economic cooperation.
Business forums would also be staged in the respective countries aimed at driving more US businesses to Ethiopia.
The ambassador pointed out that the government of Ethiopia has formulated favorable investment policy and allocated the bulk of it for those who want to do business in the country.
“Taking in to account the trade and investment relations with the US have not reached at the desired level, Ethiopia is working to tap the potential through investing in some key areas and the construction of industry zones are believed to ease infrastructural and bureaucratic setbacks.”
The country has also issued various incentives for investors to engage in priority sectors, in particular in the manufacturing industry.
Ambassador Fitsum further stated that Ethiopia’s entitlement to African Growth and Opportunity Act (AGOA) and other preferential trade agreements are helpful to American investors as they can export their products to those markets. Ethiopia is also hugely engaged to capitalize on Trade Africa Initiative and Doing Business in Africa Campaign, both aimed at fostering the US commercial relationship with Africa.
Ethiopia’s viable investment policy, rule of law and certainty of investors have made big contributions to attract investment to the country, he said, adding t the Embassy is working to encourage US companies to contribute share for the expansion of investment projects that generate job opportunities for the youth.
Regarding political ties, the ambassador said the two countries are jointly working to ensure peace and stability in the Eastern Africa region and have strong partnership to combat terrorism. In this regard, the collaboration of USA and Ethiopia has borne fruit by bringing peace and stability in the turbulent region. Besides, concrete efforts are underway to scale up partnership in democracy, human rights, peace, education and health sectors, among others.
About Ethiopian Diaspora in the US, Ambassador Fitsum said Ethiopian diplomatic missions are partnering with relevant government organs to ensure citizens’ rights and benefits and encourage them to contribute share to their home country’s development.
The government has been exerting maximum effort to engage Ethiopians living in the US in the development of the country, he noted, adding that the incumbent also encourages the Diaspora’s participation in national issues including the recently launched Ethiopian Diaspora Trust Fund (EDTF).
Furthermore, varieties of incentive packages have also been designed to encourage and support the large Ethiopian community in the US to take part in their country’s untapped investment opportunities thereby contributing share in the socio-economic development of Ethiopia, he stated.
The ambassador also extended calls for Ethiopian Diaspora in the US increased support to expedite development endeavors in their homeland and back mega projects including the Grand Ethiopian Renaissance Dam financially, professionally and in other ways.
Commenced diplomatic ties in 1903, the political relation between Ethiopia and the US is currently expanding in the spheres of trade and investment.