Blog - Latest News
You are here: Home / Uncategorized / Ethio-Eritrea Peace Pact Is Having Positive Effect throughout Horn of Africa,... 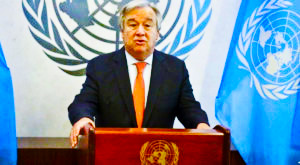 Ethio-Eritrea Peace Pact Is Having Positive Effect throughout Horn of Africa, Says Guterres

Addis Ababa, February 6, 2019 – U.N. Secretary-General Antonio Guterres said reconciliation between Ethiopia and Eritrea has illustrated bright spots on the African horizon.
Ethiopia and Eritrea signed a peace pact in July, ending two decades of animosity following a dispute over their border.
“The reconciliation is having a positive effect throughout the Horn of Africa,” Guterres said.
“We see negotiations between Djibouti and Eritrea, and we see reconciliation between Eritrea and Somalia that already took place,” he said.
“We see in many other areas movement in the right direction, and we are totally committed to work together – the African Union and the African sub-regional organizations – to support this wind of hope.”
He is also encouraged that the U.N. can hit the reset button in its relations with Somalia.
Somalia is making progress, particularly on economic reform, and the U.N. wants to encourage and support that, including through urging international financial institutions to offer their support.
The Secretary-General said further stated that there has been a “quantum leap” in relations between the world body and the AU and he hopes this can translate into progress on some of the continent’s biggest challenges.

“I am totally committed to the cooperation between the African Union and the United Nations,” Guterres told VOA in an interview at U.N. headquarters Tuesday.
“We are working more and more together in addressing a number of situations in Africa.”
Guterres also expressed optimism that efforts to end protracted crises in Libya and South Sudan could make progress this year.
“Our own objective is to make Africa overcome its difficulties, to make Africa a continent of hope, to make Africa a continent of the future, to make Africa a pillar of the world in which we live — not seen as a problem, but seen as an opportunity,” he said.
Guterres is expected to come to Addis Ababa for this weekend’s 32nd AU summit.