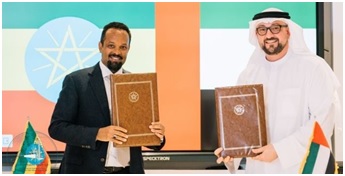 Prime Minister Abiy Ahmed presided over a signing ceremony of a memorandum of understanding (MoU) between the Government of Ethiopia, acting though the Ministry of Finance, and the Abu Dhabi future energy Company PJSC-Masdar.

The signing of the MOU was initiated during the State Visit of the Prime Minister to the United Arab Emirates (UAE), where representatives of the Government of Ethiopia and the Government of UAE agreed to jointly develop 500MW PV projects in Ethiopia.

The primary objective of the MoU is to formalize the intention of the Parties to further discuss the potential areas of collaboration and possibly potential projects and services related, said office of the Prime Minister.

The Prime Minister remarked that since 2018, Ethiopia has been undertaking a wave of reforms, particularly to strengthen the economy by harnessing private sector investments.

He reiterated that Ethiopia, as a nation with untapped potential in various sectors that can be catalysed to transform the lives of people, the energy sector has been identified as one critical lever.

Chief Executive Officer of Masdar, Mohamed Jameel Al Ramahi, noted that Ethiopia has abundant resources for solar and wind power and Masdar as one of the largest renewable energy companies in the world is excited to invest in Ethiopia.

He further remarked that under Prime Minister Abiy Ahmed’s leadership, the environment has transformed, enabling such private sector investments in Ethiopia.