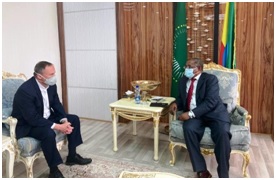 Gedu underscored the statement on the GERD and the negotiation process as misleading and wrong as the GERD doesn’t stop the flow of the Nile waters, according to the Ministry of Foreign Affairs.

The Minister further informed the Ambassador that Ethiopia has never and will not in the future succumb to threats to its sovereignty and will be committed to continue the trilateral negotiations under the framework of the African Union.