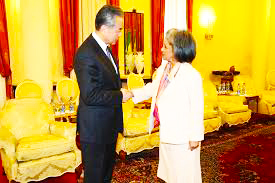 Addis Ababa, January 22, 2019 – Ethiopia’s Minister of Foreign Affairs, Dr. Workneh Gebeyehu met with his Swiss counterpart, Ignazio Cassis today in Davos, Switzerland, on the margins of the 2019 World Economic Forum.
During the meeting, they discussed bilateral and multilateral issues of common interest, according to the Ministry of Foreign Affairs.
Dr. Workneh briefed his Swiss counterpart on the sweeping political and economic reforms underway in Ethiopia under the new leadership.
He said the reform was vital to ensure socio-economic development, the widening of the political space, reign of the rule of law, ensuring media freedom and respect of human rights.
In such score, he noted that a number of important legislation have been in the process of revision and will soon be completed.
Dr. Workneh further underlined the importance of enhancing the bilateral economic cooperation, particularly in areas of trade and investment.
Foreign Minister Ignazio Cassis has pledged to encourage the Swiss private sector to invest in Ethiopia with the view to strengthening the bilateral economic cooperation.
The two Ministers also underscored the need to finalize the signing of the agreement on avoidance of double taxation, noting that doing so would further strengthen the bilateral economic ties.
They also agreed to continue the bilateral political consultations they have been conducting at the level of the State Ministers of Foreign Affairs of the two countries.
Ethiopia and Switzerland held their 3rd round political consultation in Bern, Switzerland in March 2018. Switzerland is a key partner of Ethiopia in Federalism and Governance.
Similarly, Foreign Minister Dr. Workneh also held discussions with President of International Committee of the Red Cross (ICRC) Mr. Peter Maurer.
Minister Dr. Workneh commended the ICRC for its practical, fruitful works it undertook to support Ethiopia over the course of time.
He also briefed the President on the sweeping political, economic reforms that has unleashed a powerful wind of hope ushering a new dawn a new chapter as Ethiopia sternly strides to tackle poverty, deep democracy and good governance across the board.
President Peter expressed his appreciation for the steps undertaken by Ethiopia to revitalize progresses politically, economically showcasing ardent determination for regional peace, stability and integration.