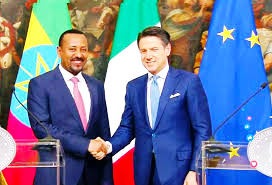 Addis Ababa, January 21, 2019 – Ethiopian Prime Minister Dr Abiy Ahmed met with his Italian counterpart, Giuseppe Conte, in Rome today.
In a press conference after the meeting, Prime Minister Dr Abiy said “I had a productive discussion with international agencies and the Government of Italy.”
“The comprehensive discussion which I had with Giuseppe Conte in particular was important to to take the bilateral relationship between the two nations to the next level,” he said
PM Dr Abiy appreciated Italy’s decision to finance the first phase of study of the planned railway line project linking the Eritrean port of Massawa with the Ethiopian capital Addis Ababa.
Italy also agreed to support Ethiopia’s projects to tackle food insecurity of school-aged children and rehabilitate Ethiopian soldiers who returned from Ethio-Eritrea border following the agreement inked between the two nations.
The Prime Minister also called for enhanced cooperation between Ethiopia and Italy in the areas of development, peace, and tourism.
PM Dr Abiy also made a courtesy visit with the President of the Italian Sergio Mattarella at Quirinal Palace.

Both recounted the historical relationship between the two countries and continued cooperation in key social and economic areas of development, according to Office of the Prime Minister.
Furthermore, President Mattarella expressed his appreciation of the changes that are taking place in Ethiopia and the role the country is taking in Horn region integration.
PM Dr. Abiy traveled to Italy yesterday for an official visit following the invitation by the Italian Prime Minister during his 2018 Ethiopia visit.
Earlier today the Ethiopian Premier met with chiefs of Rome based UN agencies, namely the World Food Program (WFP), the International Fund for Agricultural Development (IFAD) and the Food and Agriculture Organization (FAO).
He will be attending World Economic Forum (WEF) in Davos, Switzerland to begin on 22 January and end on 25 January, 2019. Prime Minister Dr Abiy is one of the key speakers at the Forum.
In Davos, he will also strike dialogues with world leaders, global business leaders, economists, politicians, international financiers, and renowned high-profile academics.
The theme of this year’s World Economic Forum is “Globalization 4.0: Shaping a New Architecture in the Age of the Fourth Industrial Revolution”