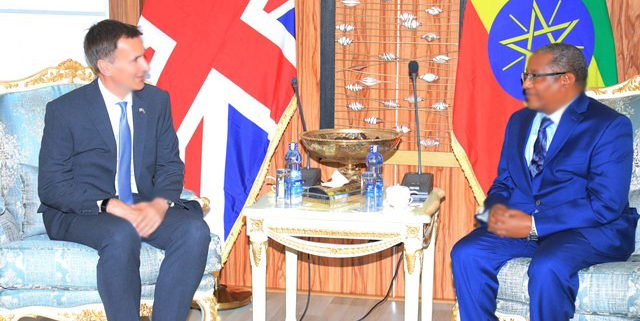 Minister of Foreign Affairs, Gedu Andargachew, today received Mr. Jeremy Hunt, UK Foreign Secretary, in which both sides pledged to deepen ties based on a long tradition of cooperation.

Gedu appreciated the growing excellent ties and historical relations between the UK and Ethiopia, thanking UK government’s commitment to support Ethiopia during a time of transformational process in the political and economic frontiers.

In connection, Foreign Minister Gedu thanked the UK for the support extended to Ethiopia in areas of institutional capacity building. In this regard the Minister particularly noted UK’s support to the National Electoral Board of Ethiopia.

The Minister also took note of Ethiopia’s steadfast roles to pacify the Horn of Africa region towards normalcy, peace and stability, which he says, is the essence for collective peace, security and prosperity of the region.

Foreign Secretary Jeremy Hunt, on his part, commended the reforms undertaken by the leadership in Ethiopia and reiterated UK’s continued support to Ethiopia’s reform agenda.

He also commended Ethiopia’s significant contributions in the maintenance of peace and security in the region, while also expressing his country’s commitment to work more closely with Ethiopia in such score.

Both sides underlined the importance of further enhancing ties in trade, business and investment, according to the Ministry of Foreign Affairs.

Former Ethiopian President to Be Laid To Rest on Sunday (May 02, 2019)