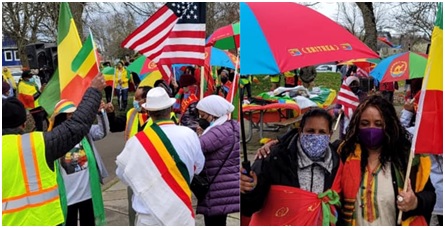 Ethiopian Americans and Eritrean Americans residing in the Greater Seattle Metropolitan Area have condemned the propaganda campaigns waged by remnants of the defunct TPLF clique and called upon their elected representatives in both Houses of the United States to carefully analyze the situation in Ethiopia.

The organizers of the rally are the “Ethiopian Public Diplomacy Team” and “Allen LeAbbay,” a Coalition of Ethiopian Women in Seattle.

In a coordinated joint public rally, the demonstrators vehemently condemned the high treasonous crimes and crimes against peace perpetrated by the TPLF clique back in November 2020.

The participants of the rally also strongly denounced the propaganda campaigns, waged by the remnants of the defunct junta that has attacked Ethiopian National Defense Forces stationed in the Tigray Region of Northern Ethiopia, for more than two decades in defense of the sovereignty of the Country and peace of its People.

The demonstrators further deplored the undue diplomatic and political pressures attempted against their country of birth, by politicians of some western countries, unjustifiably influenced by the organized defamation campaigns and lobby works, financed by the resources illegally embezzled from the Ethiopian people, in the last three decades, by some core members and supporters of criminal clique and their cronies living luxuriously within the Ethiopian diaspora.

The marchers also called upon the international community to carefully analyze the situation in Ethiopia and submitted their statements, with twelve demands, to the Offices of Honourable Patty Murray and Honourable Maria Cantwell, the two Senators representing the State of Washington in the US Senate.