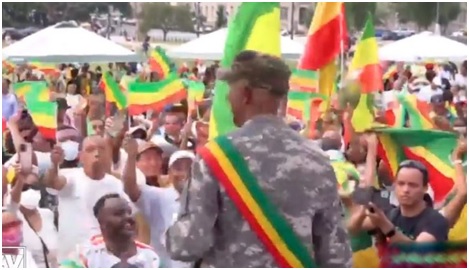 Ethiopians living in the U.S. gathered in Washington, D.C. to salute the Ethiopian National Defense Force and denounce the terrorist TPLF group.

During the rally, Ethiopians and descendants have reiterated full commitment to continue support for the national army which is now paying sacrifices to defend sovereignty and national integrity of the nation.

They also strongly condemned atrocities being committed by the Junta against civilians and called up on the international community to denounce evils of the group including use of child soldiers, attack on innocent people and impediment to humanitarian operation in the region.

TPLF Propagandists Continue To Twist Words Spoken By Government For Their Fake...

Unilateral Ceasefire Continues To Be Hampered By TPLF Provocations (July 27,...