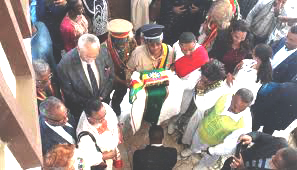 The Ministry of Culture and Tourism hosted a welcome home ceremony for locks of hair belonging to Emperor Tewodros II at the Ethiopian National Museum today.
The British National Army Museum handed over the locks hair to Ethiopia on Wednesday-more than 150 years after they were taken by a member of the British expeditionary force.
Ethiopian Minister of Culture and Tourism, Dr Hirut Kassaw, received the hair at a ceremony held in London.
The Ethiopian delegation arrived back home early today carrying the locks of hair and made their way to the National Museum.
Members of the delegation were greeted by people as they arrived at the museum.
During the handover ceremony of the hair last Wednesday, Dr Hirut also requested the Museum to return 11 replica Arks of the Covenant, which are currently in storage at the Museum.