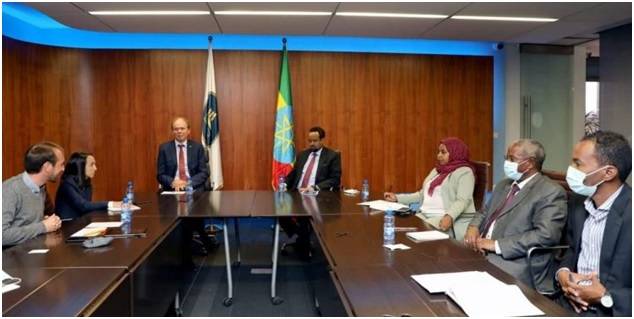 The Finance Minister Ahmed Shede has today received a delegation of the European Union Business Forum led by Erik Habers.

The forum has been serving as a bridge between the companies and the government in line with addressing shortcomings and complaints raised by both sides based on the MoU signed between the syndicate and the respective government institutions.

Members of the delegate pledge commitment to contribute their share in making Ethiopia the best chosen investment destination and jointly work with the Ministry in doing so. They also appreciated Ethiopia’s privatization program.

Ahmed Shede briefed the members of the delegation on the transformative reform in the finance and economic sector of the country and expressed the government’s interest to work hand in hand with the forum. The two agreed to collaborate in facilitating conducive investment climate in Ethiopia.