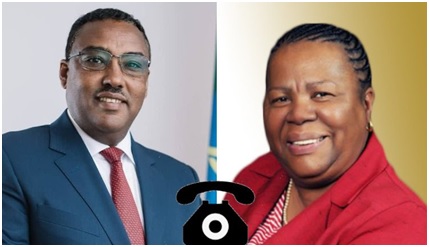 Deputy Prime Minister and Foreign Minister of Ethiopia, Demeke Mekonnen, and the Minister of International Relations and Cooperation of South Africa, Naledi Pandor, , have held a discussion over the phone today about current situations in Ethiopia.

Demeke briefed the current status of the ongoing operation of the federal government of Ethiopia in the Tigray regional state.

He told his South African counterpart that the government of Ethiopia is committed to upholding the rule of law in the Tigray region.

The government intends to neutralize the destructive forces of the TPLF gang, free the people, and rescue stranded members of the Ethiopian Defense Force, he said.

He also reiterated that the operation in Tigray would end once the TPLF gang, the perpetrator of inhuman acts, is brought to justice.

Naledi Pandor, for her part, said South Africa is closely following the current situation in Ethiopia.

She also expressed her confidence that the Ethiopian government would ensure the safety of civilians while carrying out its operation in Tigray.

The South African Minister also appreciated Demeke’s gratitude for the efforts that South Africa is exerting in the AU-led tripartite negotiations over the Grand Ethiopian Renaissance Dam (GERD).

They concluded their discussion following the congratulatory message of the South African minister to Mr. Demeke for his recent appointment as minister of the Foreign Affairs of Ethiopia.

Context for the Current Situation in Ethiopia — the Evolution of Criminality...