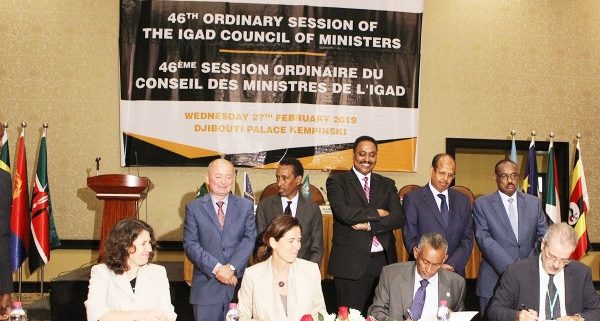 Addis Ababa, February 27, 2019 – The 46th Ordinary Session of the IGAD Council of Ministers which was held in Djibouti under the Chairmanship of Foreign Minister and Chair of the IGAD Council of Ministers, Dr. Workneh Gebeyehu wrapped up later today.
The session was attended by Mahmoud Ali Youssouf, Minister for Foreign Affairs of Djibouti, Ahmed Isse Awad, Minister for Foreign Affairs of Somalia, Dr Al-Dirdiery Mohamed Ahmed, Minister for Foreign Affairs of Sudan, Hirut Zemene, State Minister for Foreign Affairs of Ethiopia and Mohamed Ali Hassan, Permanent Secretary in the Ministry of Foreign Affairs of Djibouti.
Mahboub Maalim, IGAD Executive Secretary; Hadiza Mustapha, Special Advisor to the Chairperson of the African Union Commission, Dr Ismael Wais, IGAD Special Envoy for South Sudan and Dr Mohamed Ali Guyo, IGAD Special Envoy for Somalia were also in attendance.
The meeting underlined the importance of expediting the endorsement of the proposed treaty and structure to reform IGAD; and decided that there is need for enriched and continued discussion on the organizational structure and treaty of IGAD until the next ordinary sessions of the policy organs.
It also underscored the need for a collective approach to challenges in the Red Sea and the Gulf of Aden by strengthening regional cooperation, and establishing a regional platform for IGAD Member States with a view to promote dialogue with other stakeholders including the AU and other international partners.
IGAD and Germany have signed a 34 million Euros grant agreement on the sidelines of today’s the event. The project grant will be used for migration and capacity building.
Chairperson of the IGAD Council of Ministers Dr. Workneh and Foreign Ministers of member countries witnessed the signing ceremony.