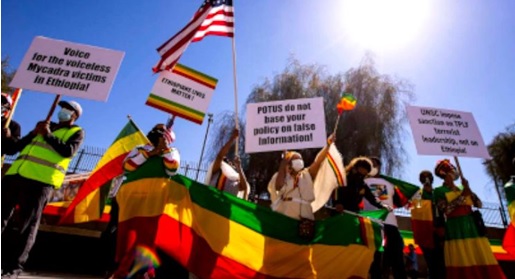 Members of the Las Vegas Valley’s Ethiopian community on Wednesday protested what they described as the U.S. government’s interference in the northeastern African nation’s domestic affairs.

The demonstrators, many of them carrying flags of Ethiopia, chanted in front of the Lloyd George U.S. Courthouse in late morning.

The goal of the protest organized by the nonprofit Ethiopian Community Center of Las Vegas was to highlight an assertion on March 10 by Secretary of State Antony Blinken that “ethnic cleansing” has occurred in the northern region of Tigray.

“The loud music we’re playing today is reflective of what we want,” said Felegehiwot Demissie, president of the community Center. “… We want our voices to be heard.”