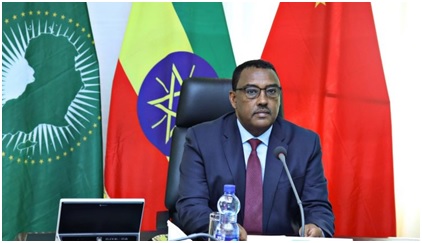 He made the remark during a virtual meeting held today to reflect on Ethiopia-China relations on the eve of the commemoration of the establishment of the 50th year diplomatic relations between the two countries.

Demeke said the two countries are engaging in extensive trade and economic cooperation as a continuation of relations rooted in ancient civilizations and struggles against alien forces.

Chinese massive investments in some notable sectors, including the Addis Ababa-Djibouti Railway, Industrial parks, tourist attraction parks, satellite technology development, are manifestations of the ever-growing relationship between the two countries.

He also recounted the commendable contributions of Ethiopian Airlines during the heyday of the Coronavirus pandemic in China as a testament to China’s great value to Ethiopia.

He expressed his belief that China would make the experimental-level vaccine a public good, according to the Ministry of Foreign Affairs.

Ahmed Shide, Minister of Finance and Economic Development of Ethiopia, and Lelise Neme, Commissioner of Ethiopian Investment Commission have also delivered speeches on the occasion.

They explained the trade balance focus on the economic advantages Chinese companies would get in involved in the economic life of Ethiopia.

Vice-president of China Africa Development, ZHOU Chao, and ZHANG Huarong, President of Huajian Group have also presented their reflections on their experience investing in Ethiopia.

Ethiopian Ambassador in China, Teshome Toga, and the Chinese ambassador in Ethiopia, Zhao Zhiyuan concluded the meeting with remarks underlining that the foundation for Ethiopia-China relations is mutual respect and mutual benefits.

The meeting was organized by Ethiopian Embassy in Beijing and the Chinese People’s Association for Friendship with Foreign Countries (CPAFFC) and it brought about 100 participants, including politicians, academicians, and business people from Ethiopia and China.

Brief Illustrative Summary of Efforts to Reconcile With TPLF (November 23, ...