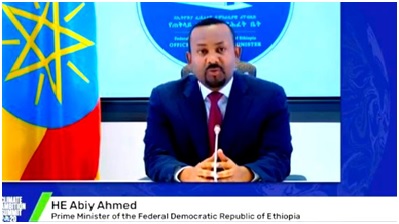 Over the last two years, Ethiopia’s green economy strategy has been fully mainstreamed into the recently launched yet 10 year perspective development plan, which runs from 2021 to 2030, Prime Minister Abiy noted.

“As part of our commitment to the Paris Agreement, we have also launched it our 15 years ambitious national adaptation plan aimed at reducing the vulnerability of the country to the adverse impacts of climate change.”, stressed the premier.

The plan has identified 18 options across the most vulnerable sectors, including agriculture, forestry, health, and transport, Abiy explained.

“We have also recently intensified our commitment in the fight against climate change by launching our green legacy national flagship initiative in 2019, aimed at planting 20 billion seedlings within four years.”, premier added.

Prime Minister Abiy added saying “During the last two years, we have managed to plant more than 9 billion seedlings. As of next stage, my government is working to extend the green legacy initiative into neighboring countries.”

Ethiopia is also on the verge of finalizing the process of updating its nationally determined contribution as well as the preparation of the 2015 long term, low carbon development strategy, the premier underscored.

“Despite the challenges posed by the COVID-19, I would like to reiterate the unwavering commitment of Ethiopia in the global fight against climate change and call upon all parties to enhance their ambition and scale their climate finance support for developing countries.”, Prime Minister Abiy underlined.