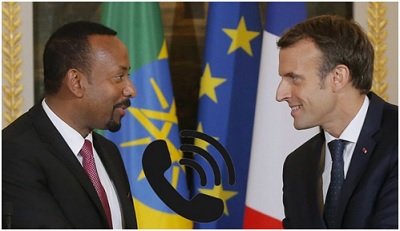 The Premier stated that he has discussed with President Emmanuel Macron on relations between the two countries and COVID 19 response activities.

“I appreciate the continued support of France for our growth endeavors”, tweeted Prime Minister Abiy.

Ethiopia and France signed a joint defense agreement, and concurred to strengthen bilateral relations and fight against extremism and maritime piracy in the region on March, 2019 during president’s visit to Ethiopia.

Prime Minister Abiy Ahmed and President Emmanuel Macron also visited the churches of Lalibela, carved out of rock centuries ago.