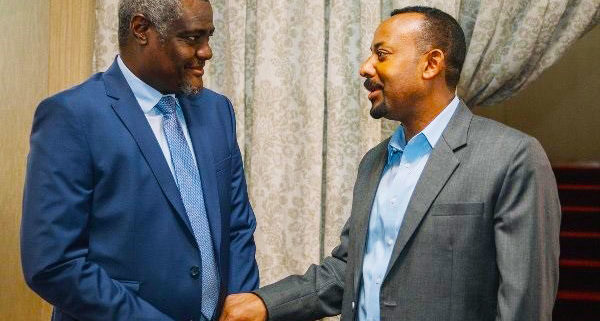 Ethiopia’s Prime Minister Dr Abiy Ahmed and Moussa Faki Mahamat, the Chairperson of the African Union Commission, held an in-depth exchange of views on the situation in the Sudan today.

They welcomed the significant progress made in the negotiations between the Sudanese parties in conformity with the guidance given by the African Union Peace and Security Council on 6 June 2019 and the Extra-Ordinary Meeting of the Inter-governmental Authority on Development (IGAD) Council of Ministers held on 19 June 2019.

The Prime Minister and the Chairperson congratulated their respective Special Envoys, Ambassador Mahamoud Dirir and Professor Hacen El Lebatt, on the excellent work accomplished, despite the difficult circumstances, to reconcile the positions of the parties and speedily facilitate a Political Agreement to implement a democratic transition in The Sudan.

They also thanked the Sudanese people and all the national political and social actors for their positive interaction with the African mediation undertaken collectively by their respective Special Envoys, according to a joint communiqué issued after the meeting.

They further strongly encouraged the national actors in Sudan to redouble their efforts to overcome their differences in a spirit of understanding and mutual concessions and to speed up the conclusion of the Political Agreement which is well within their reach, seizing this opportune time and critical moment without any delays.

They also commended international partners for their constructive support of the African mediation process and called upon them to reinforce their support during this critical juncture of the negotiation process in Sudan.

The Prime Minister and the Chairperson re-emphasized the need for a Sudanese-owned process, free from any external interference and in full respect of the sovereignty and the will of the Sudanese people in the pursuit of a Political Agreement.