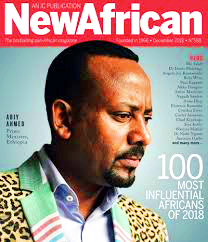 Prime Minister Dr. Abiy Ahmed and six other Ethiopians, including Group CEO of
Ethiopian Airlines, Tewolde GebreMariam and CEO of Ethio Telecom, Frehiwot
Tamiru have made it to New African magazine’s list of “100 Most Influential
Africans.” According to New African magazine, the annual list has become an
industry and readers’ much-awaited collation – revealing Africans who contributed
in shaping the African narrative in the concluding year and envisaged to play a big
role in the coming year, both on the continent and in the Diaspora.
There is an equal amount of men and women featuring in this year’s list of “100
Most Influential Africans,” and the report noted Dr. Abiy’s bold moves to ensure
gender parity. It said, “Ethiopia even taking a lead in achieving gender parity in
Cabinet, and appointing its first ever female President under its new reformist
Prime Minister Abiy, the magazine felt it apt to produce a 50/50 ratio in this year’s
list…and this happened as much by chance as it did by design.”