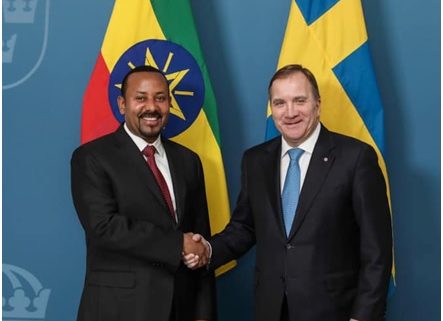 Prime Minister Lofven congratulated Prime Minister Dr Abiy for his Nobel win and expressed his Government’s appreciation of various measures and initiatives taken by him.

Prime Minister Dr Abiy on his part shared his gratitude to the Swedish Government for the continued support provided for education, health, water supply, rural roads and integrated rural development.

Explaining the ongoing reforms his administration is committed to, he highlighted the challenges of ungovernable emotions in a transition period and reiterated the importance of believing in the potential of tomorrow and working hard towards it.

Following the visit to Stockholm, Prime Minister Dr Abiy will travel to Oslo for the Nobel Peace Prize award ceremony, which will take place tomorrow.

He won the prize in October for his peacemaking efforts which ended two decades of hostility with Eritrea.

The Prime Minister will deliver the Nobel lecture at Oslo City Hall tomorrow, the day of the ceremony and the anniversary of the death of the Nobel Prizes founder, Swedish industrialist Alfred Nobel.

He will also meet Prime Minister Erna Solberg, as well as King Harald V, and visit the Norwegian Parliament.

Joint Statement of Egypt, Ethiopia, Sudan, the United States, and the World...