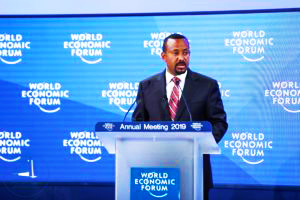 Addis Ababa, January 23, 2019 – Ethiopia’s Prime Minister Dr Abiy Ahmed addressed the 2019 World Economic Forum (WEF) in Davos, Switzerland, a few minutes ago.
The Prime Minister told participants about the nationwide reforms undertaken during the past nine months and the economic growth registered in the country.
“Ethiopia today is among the fastest growing economies in the world, consistently averaging growth of over 9%. Poverty has been halved and education enrolment has markedly increased,” he said.
“Ethiopia’s Gross domestic product (GDP) has multiplied 10 fold in 25 years.”
According to the Prime Minister, investment in infrastructure has contributed a lot to the growth and attracted Foreign Direct Investment (FDI), making Ethiopia one of the leading FDI destinations in Africa.
“Our challenges however, remain formidable.” The challenge, he explained, is to sustain that level of growth, especially to find jobs for a rapidly expanding young population.
“In order to enforce our up word trajectory and achieve even more rapid and sustainable growth, Ethiopia has embarked on a comprehensive reform process since last April,” he said.
The reform is deeply rooted in the philosophy of “medemer” an Amharic word for coming together, which is people centered and has three interdependent pillars- vibrant democracy, economic vitality and regional integration and openness to the world, he said.
After pledging to make easier to do business for everyone who wish to invest in Ethiopia, he called on investors from all across the world to take advantage of the huge investment and business potentials available in the country.
The Prime Minister said his government is committed to opening up the economy to international investors in telecom, logistics, energy, aviation, railways, and industrial parks. The Premier further said his government will continue to foster public private partnership.