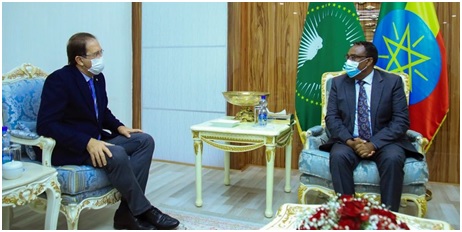 H.E. Demeke Mekonnen, Deputy Prime Minister and Foreign Minister of Ethiopia welcomed to his office on Thursday (December 04), the President of the Association of National Olympic Committees of Africa (ANOCA), Mr. Mustapha Berraf.

Mr. Mustapha is in Addis Ababa to attend the Association of National Olympic Committee of Africa (ANOCA) Extraordinary General assembly which will be held on the upcoming Sunday.

On the occasion, Mr. Demeke briefed the ANOCA president about the potential of Ethiopian regional cities to host international sports competitions mentioning the construction of stadiums and sports facilities in various parts of the country.

Mr. Mustapha thanked the minister for meeting with him on such short notice and affirmed that ANOCA would continue to work closely with relevant bodies in Ethiopia.