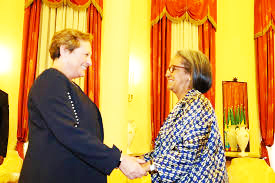 Addis Ababa, December 28, 2018 – President Sahle-Work has received and held talks with the outgoing British ambassador to Ethiopia, Susanna Moorehead.
The President thanked the true friendship both countries enjoyed including collaboration on a myriad of issues of mutual concern at regional and global levels.
She further emphasized the need to further bolster trade and investment ties between Ethiopia and the UK.
The British expressed her country’s continued commitment to support Ethiopia and the efforts of ensuring regional peace, stability and economic integration in the Horn of Africa.
Ethiopia and the UK have enjoyed rich diplomatic relations covering a range of areas, including trade, culture, education and development cooperation.
Britain was among the first countries to open an embassy in Addis Ababa, while Ethiopia was the first African country to establish an embassy in London.