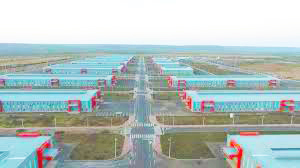 Six industrial parks will be completed and go operational after three months, said Ethiopia’s Indusial Parks Development Corporation (IPDC).
Out of the 11 industrial parks which the country has planned to build with 30 billion birr in the first phase, five of them have started production.
ccording to elise eme, director general of the corporation, the remaining six parks will go operational in the coming three months.
The six parks are the Diredawa, Jimma, Bole Lemi, Deberbirhan, Bahirdar and Arerti, she said.
Due attention will be paid towards creating employment opportunities for the local community and ensuring investors’ benefit.
Ethiopia plans to build 30 industrial parks by 2025.

Ethiopia, US Discuss On Opportunities For Security Cooperation. (November 28,...

Reform in Ethiopia Model for Other African Countries, Says US Assistant Secretary....