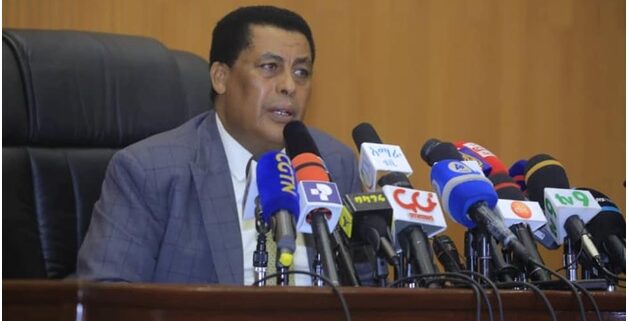 The spokesperson of Foreign Affairs of Ethiopia, H.E. Ambassador Dina Mufti, gave the Ministry’s biweekly press briefing today (July 01, 2021) to the media. In his presentation, the Ambassador focused on political diplomacy, the humanitarian ceasefire in Tigray, Economic and citizen-centered diplomatic activities over the week.

Deputy Prime Minister and Minister of Foreign Affairs of Ethiopia, H.E. Demeke Mekonnen met on Monday (June 28) with Graham Maitland, UN Director for Eastern African Division of the Department of Political and Peace Building Affairs and Operations. The two sides, among others, have discussed Sudan’s request to the UN to remove the Ethiopian peacekeepers from the disputed Abyei region. In this regard, Mr. Demeke said Ethiopia’s force members are paying sacrifices to prevent war, and their exit, if necessary, has to be with the consent of stakeholders and in a dignified manner. The Deputy Prime Minister also questioned the morality of some UN agencies in politicizing and unnecessarily echoing the cases of some Ethiopian soldiers who dramatize their defect from their unit just to get acceptance to their asylum quests.

Deputy Prime Minister and Minister of Foreign Affairs, H.E. Demeke Mekonnen bade farewell on Monday (June 28) the outgoing Ambassador of the Hashemite kingdom of Jordan to Ethiopia, H.E. Wafi Ayyad. Mr. Demeke said the relationship between the two countries is long and historic, adding that the two countries need to further strengthen bilateral cooperation in various fields. In connection with their discussion on GERD, the Deputy Prime Minister expressed his dissatisfaction with the Arab League’s unfair stance on the Grand Ethiopian Renaissance Dam. He also said that Jordan was expected to play a positive role as a friendly country in this regard.

The Intergovernmental Authority on Development (IGAD) Council of Ministers has held its 72nd extraordinary meeting virtually on Thursday (June 24) chaired by the Chairperson of the Council of Ministers and Minister of Foreign Affairs of Sudan, H.E. Mariam al-Sadiq al-Mahdi. Ambassador Birtukan Ayano representing Ethiopia, said the 6th national election in Ethiopia ended peacefully with the participation of nearly 40 million voters and thanked member countries and institutions for their support in this regard. The meeting ended in a constructive manner where all the speakers praised the electoral process in Ethiopia, Djibouti, and Uganda, and gave due attention to outstanding issues of member states that were held as agenda items.

In a letter sent to the president of the United Nations Security Council (UNSC) on Wednesday (June 23), Ethiopia rejected the latest attempts made by Egypt and Sudan to seeking the involvement of the Security Council over the GERD issue outside of its mandate. Ethiopia said in the letter that Egypt and Sudan’s recent actions are simply a continuation of a well-orchestrated scheme to undermine the AU-led process and eventually declare it ineffective adding that this only erodes trust between the three countries. The letter concluded its explanation of Ethiopia’s stand over the tripartite negotiations by calling on the Security Council to encourage Egypt and Sudan to continue negotiating in good faith under the auspices of the African Union.

A. Following the declaration of the unilateral ceasefire by the government of Ethiopia in the Tigray region, Prime Minister Abiy Ahmed spoke with the media; Deputy Prime Minister Demeke Mekonnen addressed Ethiopian mission leaders via zoom while State Minister Ambassador Redwan Hussien and General Bacha Debele jointly briefed the media regarding the unilateral ceasefire that the government declared in Tigray. The main points on the necessity of humanitarian ceasefire are:

General Bacha further said the army is ready to respond accordingly if unduly provoked by attacks that compromise the spirits of the ceasefire.

B. Reactions from the International Community

African Union, China, UAE, United Nations, United States, Sweden have welcomed the ceasefire although some were cautious in this regard. Their major point is that all conflicting parties should strive for peace and be willing for further dialogue.

Finance Ministers of Djibouti, Ethiopia, Kenya, Somalia and Sudan under the Horn of Africa Initiative (HoAI) met on Saturday (June 26) in Djibouti to evaluate progress witnessed so far in areas such as trade and energy and to discuss the way forward.