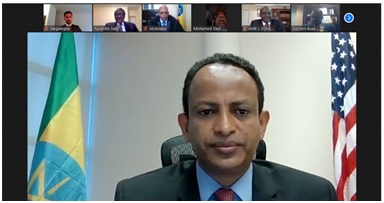 Ethiopian Ambassador to Washington, Fitsum Arega yesterday briefed the Heads of Missions and diplomats of Ethiopia’s neighboring countries accredited to the United States.

The briefing mainly focused on the current situation in Ethiopia in relation to the law enforcement measures in Tigray regional state, according to the Ethiopian Embassy in Washington DC.

Ambassador Fitsum recounted the efforts by the federal government for dialogue in the past two and half years where by the TPLF’s clique stubbornly rejected and continued to belittle the reform process.

He mentioned that the TPLF gangs crossed the red line when they commit the barbaric and treasonous attack on the unsuspecting Ethiopian National Defense Forces of the Northern Command.

Ambassador Fitsum said the law enforcement operation has been successfully completed after the seizure of Mekelle by the heroic Ethiopian National Defense Forces (ENDF).

He also noted that the remaining task will be apprehending TPLF’s cliques and bring them to justice.

Ambassador Fitsum expressed his gratitude to the leaders and governments of Ethiopia’s neighbors and IGAD member states for standing with us and for their invaluable support to Ethiopia’s sovereignty, national integrity and lasting peace.

The Head of Missions and diplomats thanked Ambassador Fitsum and the Embassy for organizing this timely and important briefing.

They also appreciated the government of Ethiopia for wrapping up the law enforcement operation in a short time with minimum civilian casualties.

The Ambassadors vowed to work closely for the peace and economic integration of IGAD region.