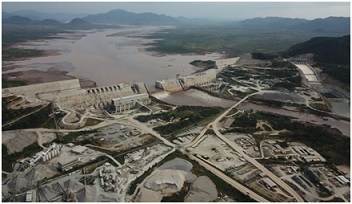 The tripartite negotiation between Ethiopia, Sudan and Egypt on the guidelines and rules for the first filling and annual operation for the GERD continued for the fourth day on Saturday, 13 June 2020.

In the meeting held via a video-conference under the chairmanship of the Sudan and in the presence of the observers, the three countries negotiated on technical issues on the first filling and annual operation of the GERD.

The countries also reached an understanding on dam safety rules, environmental and social impact assessment studies, and entry into force of the guidelines and rules.

On Sunday, the three countries will exchange the guidelines and rules incorporating the outcomes of the negotiation, according to a statement the Ministry of Water, Irrigation and Energy sent to FBC.

While recognizing the progress made in the previous days of the negotiations, Ethiopia stressed that:

“Despite the accusation of the Spokesperson that the ‘negotiations are faltering because of Ethiopia’, the truth is we have made progress and if the ongoing negotiation is to falter it is only because of Egypt’s obstinacy to maintain a colonial based water allocation agreement that denies Ethiopia and all the upstream countries their natural and legitimate rights,” the Ministry said in the statement.

The negotiation will reconvene on Monday, 15 June 2020, with the chairmanship of the Egypt, according to the Ministry.