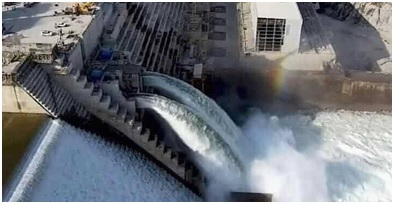 Minister of Water, Irrigation and Energy, Dr. Seleshi Bekele said that both the recently completed bottom outlets of the Grand Ethiopian Renaissance Dam (GERD) have gone operational with total capacity of discharging 1,860 cubic meters per second.

In an exclusive interview with EBC, the Minister said the process of the dam is now in state of reassuring safety, quality and functionality of ancillary structures.

The completion of the two bottom outlets ensures continuous water flows to the downstream countries and supports the overflow of the river, he noted.

Out of the two outlets, the right one opened last Wednesday while the other became fully functional last night, according to Dr. Seleshi.

“Each has a capacity of discharging 930 metric cube of water per second with total capacity of 1,860m3/s.  It means the two together actually come to discharge the entire flow of Abay River in a matter of a year.” the Minister elaborated.

“Our dam is designed in such a way that it doesn’t cause any type of harm to downstream countries.” he underlined.

The two bottom outlets have a capacity to complete the withdrawal of 50 billion cubic meters which is average annual flow of the Abay River.

Outflow of the water is not managed only through the two outlets, the Minister said, adding that when thirteen turbines start operation each enables inflow of 330 cubic meter of water per second allowing large amount of water to the downstream.