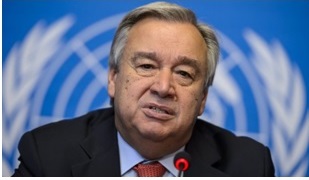 The UN Secretary-General Antonio Guterres has voiced his support to the trilateral negotiations on GERD under the framework of the African Union (AU).

At a briefing yesterday, UN Spokesperson expressed Guterres’ full support for the efforts of the Chairperson of the AU, President Cyril Ramaphosa in the negotiations between Egypt, Ethiopia and Sudan on the dam.

“I think, for the Secretary General, our position is one of supporting the on-going efforts of the Chairperson of the African Union, Cyril Ramaphosa, who is encouraging the parties to reach a mutually beneficial agreement,” he said.

“The Secretary General calls on all concerned countries to take concrete steps to finalise an agreement in the spirit of goodwill, consensus and compromise,” he added.

According to him, the dam can become an important instrument of cooperation and partnership between Ethiopia, Sudan and Egypt as they strive towards a peaceful, prosperous future for their own people.

Under the auspices of the AU, the three countries will resume talks on the dam today after seven-week break.

The European Union (EU) also expressed its support for the AU-led tripartite negotiation.