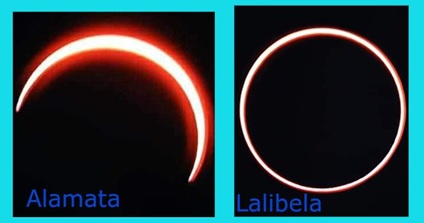 The annular solar eclipse has been partially and fully seen in several parts of Ethiopia starting from this morning.

The solar eclipse has been observed at places in and around Lalibela, Enjibara and Alamata towns and Bahir Dar City Surroundings among other districts in Oromia, Amhara and Tigray Regional States.

Heritage Management Division Head at Lalibela city Administration Culture and Tourism Bureau, Habtamu Tesfaw said the solar eclipse began in the twon at 6:00 AM in the moring and finished at 8:00 Am local time, and observed by dwellers of the area and visitors from across the nation.

The solar eclipse has also been observed from parts of Africa and Asia, including the Central African Republic, Congo, Southern Pakistan, northern India, and China.

The solar eclipse occurs when the sun, moon and earth are aligned, and the annular eclipse is when the moon covers the sun’s center, leaving the sun’s visible outer edges often referred to as the “ring of fire”.