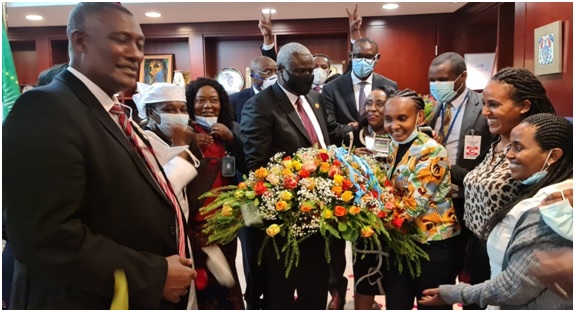 “Deeply humbled by the overwhelming and historic vote of confidence by AU Member States by voting 51 out 55 to extend my mandate at the helm of the AUC Commission for another 4 years,” he tweeted later.

Following the news of the re-election of the AUC Chairperson, Prime Minister H.E. Dr. Abiy Ahmed congratulated Moussa Faki on his Twitter page and said, “Ethiopia wishes you the best.”

Her. E. Dr. Monique Nsanzabaganwa of Rwanda was elected as deputy Chairperson of the Commission.

In the opening remarks that he had delivered earlier to the Assembly, Moussa Faki Mahamat said the new Commission of the AU will have the task of completing the institutional reforms of the AU, fulfill the expectations of member states and implement the flagship projects of Agenda 2063.

PM Congratulate Moussa Faki On His Re-Election As Chairperson Of AU Commission...