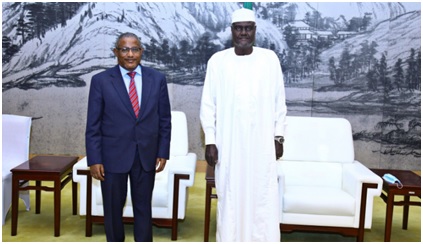 The Chairperson made the remark on yesterday during a meeting he had in his office with the Minister of Foreign Affairs of Ethiopia, Gedu Andargachew.

During the discussion, Gedu briefed the Chairperson about the successive tripartite talks held over the GERD and Ethiopia’s stance during the negotiations.

The Minister stressed Ethiopia’s refusal to be abide by the terms of colonial-era treaties which Ethiopia did not partake in and that unfairly bypassed the country’s legitimate right to utilize the Nile waters.

He told the Union’s Chairperson that preparations are underway to commence the first phase of filling the reservoir according to the schedule.

Gedu further urged the Commission to note and appreciate Ethiopia’s legal and natural right to equitably utilize its natural resources and accelerate its development.

Moussa Faki Mahamat on his part expressed his belief that unresolved issues of the GERD should be solved in line with the spirit of the catchall phrase ‘African Solutions to African Problems’.

The Chairperson further said the Union will work to facilitate dialogue for the three countries to help them solve the GERD issues through dialogue.