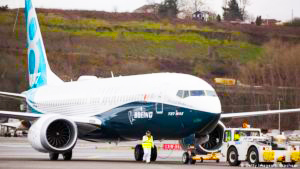 Boeing has grounded its entire global fleet of 737 Max aircraft after investigators uncovered new evidence at the scene of the fatal Ethiopian Airlines crash.
The US plane-maker said it would suspend all 371 of the aircraft, according to BBC.
The Federal Aviation Administration (FAA) said fresh evidence as well as newly refined satellite data prompted the decision to temporarily ban the jets.
The FAA had previously held out while many countries banned the aircraft.
The crash on Sunday in Addis Ababa killed 157 people.
It was the second fatal Max 8 disaster in five months after one crashed over Indonesia in October, claiming 189 lives.
What has the FAA discovered?
The FAA has a team investigating the disaster at the Ethiopian Airlines crash site working with the National Transportation Safety Board.
Dan Elwell, acting administrator at the FAA, said on Wednesday: “It became clear to all parties that the track of the Ethiopian Airlines [flight] was very close and behaved very similarly to the Lion Air flight.”
He added that “the evidence we found on the ground made it even more likely the flight path was very close to Lion Air’s”.
President Donald Trump initially announced that the FAA would be making an emergency order following “new information and physical evidence that we’ve received from the site and from other locations and through a couple of other complaints”.
The US and Brazil became the latest countries to suspend the Boeing 737 Max from flying after nations including the UK, China, India and Australia all grounded the aircraft.
Up until Wednesday, the FAA position was that a review had showed “no systemic performance issues” and that there was no basis for grounding the aircraft.
Earlier in the day, Canada grounded the planes after its transport minister Marc Garneau said he had received new evidence about the crash.
He said that satellite data showed possible similarities between flight patterns of Boeing 737 Max planes operating in Canada and the Ethiopian Airlines plane that crashed.