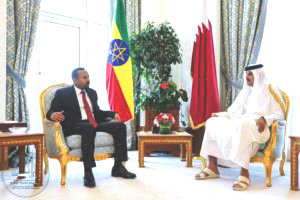 Addis Ababa, March 19, 2019 – Prime Minister Dr Abiy Ahmed today held a formal session of talks with Qatari Emir Sheikh Tamim bin Hamad Al-Thani in Doha.
During the meeting, they discussed the bilateral relations between the two countries and ways of enhancing and developing them in various fields, especially in the fields of economy, investment, tourism and infrastructure.
The two leaders also exchanged views on regional and international developments at the meeting attended by high level Ethiopian and Qatari government officials.
The Ethiopian Prime Minister arrived in Doha this morning. Upon arrival, he was received by Jassim bin Saif Al Sulaiti, Minister of Communications.
The Ethiopian-Qatari relations are taking a new step towards further cooperation, with the visit of Prime Minister Abe Ahmed today.
His visit is of exceptional importance, being his first since he took office in March 2018, and following a major breakthrough in his country on the level of public freedoms and settlement of differences with neighboring countries to strengthen Ethiopia’s status as a regional power in the Horn of Africa.
The success of the Ethiopian-Qatari start-up is reinforced by the strong desire and willingness of Doha and Addis Ababa to develop and expand relations in all areas of mutual interest. This was confirmed by the visit of the Emir Sheikh Tamim bin Hamad Al-Thani to Ethiopia in April 2017.
Recent years have witnessed a remarkable development in bilateral relations between the two countries, which began decades ago, with the official announcement of the establishment of diplomatic relations between them in 1995.
The development of relations is reflected in a large number of high-level reciprocal visits and the signing of a number of bilateral agreements, which are a strong indication of the parties’ desire to promote and develop these relations to all areas of mutual interest.
Ethiopia is keen to encourage and attract Qatari investments and open the way for businessmen from different sectors to promote joint projects between the two countries that will promote and stimulate the Ethiopian economy.
It also creates positive opportunities for Qatari investors to activate foreign projects with good economic and social returns.
The Ethiopian Investment Forum, organized by the Ethiopian Embassy in Doha, opened in January this year to review investment opportunities in Ethiopia and discuss economic and trade cooperation between the private sectors in both countries.
During the forum, which included a number of Ethiopian and Qatari entrepreneurs, the Ethiopian side presented investment opportunities to Qatari businessmen in the sectors of agriculture, manufacturing, services, medicines, building materials and others.
Ethiopian-Qatari business forum will also be organized this year.