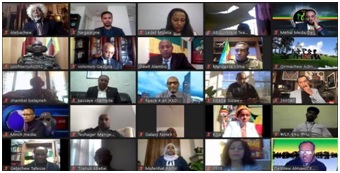 Guest of Honour and Minister of Peace, Muferihat Kamil, extended her gratitude to the Ethiopian diaspora communities for their financial and material assistances as well as knowledge transfer to their country.

She said the Government, in partnership with its compatriots at home and abroad, will strengthen its efforts of building a nation that accommodates all Ethiopians equally.

State Minister of Foreign Affairs of Ethiopia, Ambassador Birtukan Ayano, for her part urged the Diaspora community to join hands and engage in tackling the misinformation being spread by those hired by the TPLF clique.

Commander of Ethiopian Air Force, Maj Gen Yilma Merdassa, said the support of the Diaspora community from the onset of law enforcement operation was important for the victory achieved so far.

“This support would be a morale booster for further national mission,” he added.

Ethiopian Ambassador to the USA, Fitsum Arega, praised the Council for Ethiopian Diaspora Action for their successful activities and pledged to continue working with it.

Demilew Alimaw, President of the Council, thanked government officials, head of defence army and other participants for taking part in the fundraising event.

During the event, more than $21,000 dollars were raised for the humanitarian service provision efforts in Ethiopia. The Council has so far collected $330,000 via Gofundme campaign.