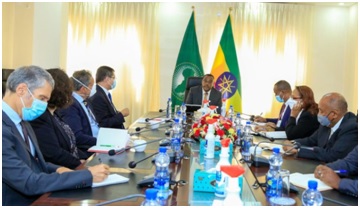 The two sides have had discussions over the commendable efforts that the government has been undertaking so far and ways to mitigate observed challenges in delivering humanitarian support to affected people in the Tigray region.

Commissioner Lenarčič appreciated the improved access in the region that cut bureaucratic hurdles while he pointed out that the intensification of the campaign in the region made some rural areas inaccessible to humanitarian support.

Ambassador Lenarčič commended the agreement of EHRC and UN to jointly investigate alleged human rights violations in the region and appreciated the announcement of the withdrawal of Eritrean troops underscoring the need to expedite the process.

The Deputy Prime Minister, on his part, said commendable improvements have been registered so far in improving the lives of many people in Tigray although the government is still facing enormous challenges to tackle there.

The government is ready to mitigate the problems observed in the region and partners would register better results in this regard if they constructively engage in supporting the government’s genuine efforts than wasting time in throwing unnecessary criticisms, he said.

Regarding the visa extension request by partners, Mr. Demeke said the government is further consulting on the issue while the quest for access to communication equipment by humanitarian partners in the region will be handled by the guidelines that have been recently distributed regarding the matter.

Present at the meeting, Mitiku Kassa, Commissioner for the National Disaster Risk Management Commission of Ethiopia (NDRMC) said many of the humanitarian partners and aid agencies are still concentrated in Mekelle and have covered only 7% of the non-food items and 30% of food items supports delivered to address the needs of 4.5 million people in the region so far.

In this regard, the government is still the major player in serving the needs of affected people in the region, and the international community is expected to scale up humanitarian support.

He said six woredas that were not reachable for humanitarian supports have now become accessible with a military escort since the past 15 days expanding access to areas in the region.

Regarding IDPs, he said there are 169,000 of them under 12 centers and the government is ready to provide them voluntary, dignified, and safe return to their homes or place them under the protection of host communities and temporary shelters for the time being.