Blog - Latest News
You are here: Home / Uncategorized / Deputy Prime Minister and Minister for the Foreign Affairs of Ethiopia... 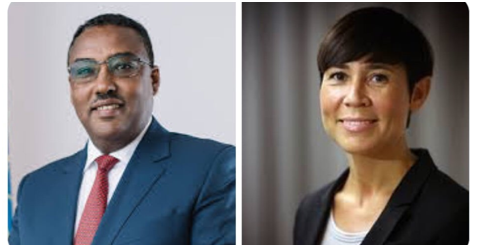 H.E. Demeke Mekonnen, Deputy Prime Minister and Minister for the Foreign Affairs of Ethiopia said any humanitarian agency is now free to get access to the Tigray region and deliver the much-needed relief support to affected people just with prior notification to the government.

The Deputy Prime Minister said this today (February 26) in a phone conversation he had exchanged with the Foreign Minister of Norway, H.E. Ine Eriksen Søreide.

In addition to the much-improved access to humanitarian support in the region, basic services have been restored and salary payment for public servants is being facilitated, he said.

Although about 3.1 million people have been reached for the relief support so far, he said, the government is taking the lion’s share in covering 70% of the delivery of food and non-food items, and support from the international community is much welcomed, including the government of Norway.

Regarding some of the concerns over the violation of human rights in the region, Mr. Demeke said the government of Ethiopia is ready to address the issues where it showed its commitment by deploying experts from the Attorney General office and the Federal Police Force to investigate the matter.

Despite misinformed allegations and inimical media campaigns from some corners, the government is creating a more conducive environment to humanitarian support and is seriously committed to bring perpetrators of any crime in the region to justice, he added.

In their discussion about the situation of the tripartite talks over the GERD, Mr. Demeke reiterated how Ethiopia has been faithfully negotiating with Sudan and Egypt so far and expressed hope that with the Congolese leadership the way forward will be sorted out.

He said the government of Ethiopia hopes to succeed in the negotiation before the upcoming rainy season in Ethiopia where the filling of the dam is scheduled to take place.

The conversation was concluded with a mutual understanding between the two officials.

PRESS STATEMENT ON THE AMNESTY INTERNATIONAL REPORT ON ALLEGED INCIDENTS IN...