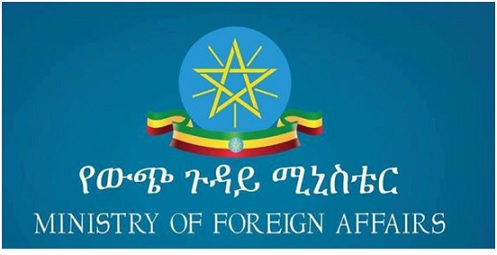 Following the cold-blooded attack perpetrated by TPLF against the Ethiopian National Defense Forces on 4 November 2020, there was a complete breakdown of law and order in Tigray. The complex challenges in the region are a direct consequence of this treasonous act. None other than the TPLF should, therefore, take the primary responsibility for what subsequently unfolded in the region. This outlaw group has been engaged in ambush, assassination, and other criminal activities.

The whole purpose of the government’s law enforcement operations has been to restore law and order in the region and bring those criminals to justice. These operations were conducted with utmost precaution to avoid collateral damage on civilians and civilian institutions. If at all there is any misconduct by anybody, corrective measures will be taken, and the pertinent Ethiopian institutions, including the Ethiopian Defense Forces are conducting the necessary internal review in this regard.

Allegations of human rights abuses, including sexual violence and other unfortunate incidents related to the Tigray region in general and the city of Axum in particular are indeed matters of grave concern. That is why the government is firmly committed to undertake the necessary investigation and ensure full accountability of all perpetrators. Similar to the massacre in Mai Khadra, the alleged incident in the city of Axum will have to be thoroughly investigated.

It is in this context that a team composed of representatives from the Federal Attorney General and the Federal Police Commission has been deployed in the Tigray Region to carry out its investigative work. The outcome of these investigations as well as the recommendations of the team enables the government to bring the perpetrators to justice and comprehensively address alleged human rights violations and incidents that have occurred in the region. In this connection, it should be noted that 36 people suspected of being directly involved in the massacre of innocent people in Mai Khadra have already appeared before the Federal First Instance Court.

Today, Amnesty International has released its report on allegations related to the incidents in the city of Axum. The report raises serious issues that should be of great concern but, obviously the methodology employed in producing the report has its own limitations as it depended on scanty information gathered from refugees in eastern Sudan and phone interview with individuals in Axum. For instance, one of the sources cited in the report is found not to be a priest as he claimed but a deceptive person who lives in Boston.

Therefore, this kind of report based on such sources will not serve the purpose of justice but has the risk of further reinforcing the misinformation and propaganda by TPLF and its cohorts. As the government has been making it clear on several occasions, some of the refugees who made it to eastern Sudan are former TPLF fighters. They are engaged in intimidating refugees and propagating misinformation. That is why it would have been appropriate for Amnesty International to undertake the necessary field work by visiting the region and talking to the competent Ethiopian authorities to uncover the truth.

On its part, the government has expressed readiness to collaborate with international human rights experts in accordance with the principle of complementarity, which gives primacy to national human rights institutions and mechanisms. It is vitally important that other partners work with national institutions, including the Ethiopian Human Rights Commission to further strengthen their capacity in the promotion and protection of human rights in Ethiopia. This is indeed the best way to facilitate a credible, transparent, independent, and impartial investigation of all allegations of violations by all parties.

Finally, now that the security situation in Tigray is steadily improving, humanitarian actors and the media are now given unhindered access to the entire region and expedited issuance of clearance will be implemented accordingly.

Deputy Prime Minister and Minister for the Foreign Affairs of Ethiopia Demeke...

UNFETTERED HUMANITARIAN ACCESS AND JOINT INVESTIGATION IN THE TIGRAY REGION...