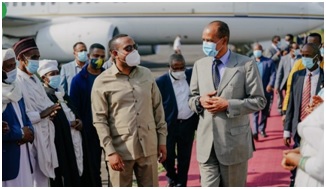 Upon arrival at Jimma Aba Jifar Airport, he was received by Prime Minister Dr Abiy Ahmed.

They will hold extensive consultations on further enhancement of bilateral ties as well as the consolidation of regional cooperation, he added.

As it will be recalled, Prime Minister Dr Abiy had paid a similar working visit to Eritrea last August.