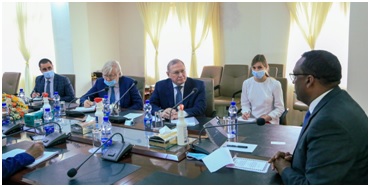 H.E. Demeke Mekonnen, Deputy Prime Minister and Foreign Minister of Ethiopia had a discussion on Thursday (April 22) with H.E. Mr. Oleg Ozerov, Ambassador-at-Large, and Head of the Secretariat of Russia-Africa Partnership Forum held on 22 April 2021.

The two sides discussed preparations for the Second Russia-Africa Summit which will be held in 2022 in Africa.

The Secretariat gave briefings about the tasks and responsibilities of his office, the creation of Association of Economic Cooperation with the African States which will bring major Russian and African companies to work together.

As part of the preparation for the Summit, consultations will be held with AU and African countries this summer.

During the discussion, Mr. Demeke told the Secretariat Ethiopia’s commitment to strengthen the long-standing relations with Russia, appreciated the initiative of Russia to establishing the platform, and request to host the Second Russia-Africa Summit in Addis Ababa.

In addition, they exchanged ideas on cooperation in the areas of security, innovation/technology, agriculture, energy, nuclear medicine, geology exploration, etc.

The First Russia-Africa Summit was held in October 2019 in Sochi, Russia, in which Prime Minister Abiy Ahmed took part.