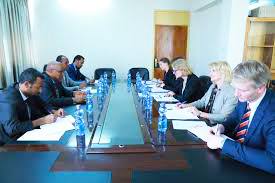 Addis Ababa, December 12, 2018 – Ethiopia and Norway held the 2nd Political
Consultation on today in Addis Ababa.
The Consultation is aimed at further enhancing mutual understanding and
strengthening of the historical relations and bilateral cooperation between the two
countries.
Director-General of European Affairs at the Ministry, Ambassador Tesfaye Yilma
noted the importance of expanding the bilateral cooperation across a wide spectrum
of areas, including the need to deepen political consultation, enhance trade and
investment ties, and boost the partnership on climate change as well as work
together on UNSC platforms.
Director-General of Regional Department at the Norwegian Ministry of Foreign
affairs, Ms. Tine Morch Smith commended the recent peaceful transition of power in
Ethiopia that laid the foundations for a durable constitution order that would chart
the country’s political, economic and social demands.
She noted the rapprochement between Ethiopia and Eritrea and its peace dividends
to the region, Ms. Morch said, “Ethiopia continues to be the anchor of peace and
stability in the region”.
Ethiopia and Norway have common interests in many areas as demonstrated by a
number of high-level official visits, including visits by Crown Prince of Norway His
Royal Highness Haakon to Ethiopia in November 2017 and Foreign Minister Dr.
Workneh Gebeyehu’s visit to Norway in June 2018.
In 2012, Ethiopia and Norway agreed to scale up their political and diplomatic
relations by signing a MoU on political, social, educational, development
cooperation.
Diplomatic relations between Ethiopia and Norway was established in 1947,
according to the Ministry of Foreign Affairs.

Dire Dawa Industrial Park to Be Inaugurated On Sunday (December 12, 2018)