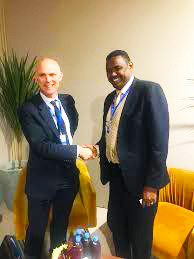 State Minister of Foreign Affairs, Dr Markos Tekle met Mr Simon Mordue, Deputy
Director- General of Migration and Home Affairs of the European commission on the
margins of the Intergovernmental Conference to adopt the Global Compact of
Migration in Marrakesh, Morocco. On the occasion, Dr Markos discussed the
sweeping changes Ethiopia is undergoing in introducing political and economic
reforms. He underlined that the changes in Ethiopia are positively impacting the
region towards peace and stability and regional integration. He in particular
highlighted that the peace accord between #Ethiopia and Eritrea has created
immense optimism in changing the conflict trap the sub-region finds itself in the
past few decades. On migration, Dr Markos underlined that focus should be given to
creating economic opportunities at home to prevent the youth from falling prey to
traffickers. He further elaborated the efforts Ethiopia is making in job creation
through labour intensive light manufacturing by building industrial zones in different
parts of the country.
He urged the #EU to further intensify its support to Ethiopia in job creation and
return as well as reintegration of returnees. He expressed his appreciation with the
EU on the progress made with the Jobs Compact and affirmed Ethiopia’s readiness
to further build on the achievements made so far.
Mr. Simon expressed his appreciation to the democratic reforms in Ethiopia and
affirmed EU’s support. He in particular noted EU’s desire to collaborate with Ethiopia
in return and reintegration, and fighting human trafficking. He also indicated EU’s
plan to pilot circulation migration where citizens from origin countries will be
allowed to European countries and return home after working for a defined period
of time.
He further reaffirmed that the EU will support Ethiopia in realizing the commitment
contained in the Global Compact on Migration.

UNICEF: Ethiopia Continues to Champion the Sustainable Development of Africa...